Over the past many weeks, I have made some tremendous progress and have lots of exciting updates to share with you! For those who were wondering, I did finally get my Kickstarter funds transferred to me, even though it took a few more weeks than I initially expected.

I have setup a complete Mac OS X development system, made numerous improvements to the OpenShot Library build system (which is responsible for cross-platform compiling), and I am happy to report that everything works great on OS X, Windows 7 and 8, and Linux!  Not only did I get everything working nicely, I also documented the entire build process (i.e. instructions) for each operating system.

For the past 4 weeks I have been working with a professional interface design artist on the next generation timeline interface... which is a big part of this Kickstarter plan. This is just a "rough" draft, showing the progression of our mock-ups so far. Enjoy!

I have completed the development schedule for OpenShot 2.0! It was very tricky getting everything scheduled in, but I am happy with the final plan. Here are a few highlights, for those that don't want to read the entire plan:

I have just placed the order for T-shirts, Flash drives, certificates, and mailing supplies (envelopes, cardboard, paper, etc...). However, compiling the final list of backer information was much more challenging than I anticipated. =) While Kickstarter does a good job of letting me download the backer information as a CSV, it gives me a separate file for each reward level (each with their own column orders... so none of them matched). Then I merged in the opt-out database and additional PayPal backers. My final task was building a report which combined all this data, analyzed it, and helped me determine how many T-shirts of each size, how many flash drives, which name to print in the credits, etc... So, I am glad this phase is coming to an end soon. Once the supplies arrives, my wife and kids have volunteered to help me form an assembly line, and get these in the mail as soon as possible. My kids are very excited to have a part in the process. =) 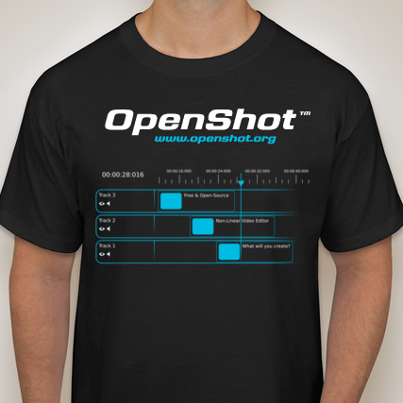 I don't want to start an operating system discussion (i.e. war), but I thought I would share my thoughts on the 3 operating systems I've been using so much. So far, my favorite development environment is Linux, which is delightful to use (especially for programmers). Mac is my second favorite, with a very nice setup for programmers, and continues to improve as I learn to navigate its unique keyboard mappings (for example, the 'home' and 'end' keys). Windows 8 has been the most difficult to work with, especially setting up the build environment and dependencies. Also, since much of OpenShot's build process takes place in a command line / terminal environment, that probably accounts for why Windows frustrates me so much. See, I got through that without starting a war... hopefully.

I will be sending out my next update in about 1 week, with more artwork and mock-ups to share, and an update on rewards. I hope you enjoyed the update and thanks again for your support!